View the recording from the presentation. 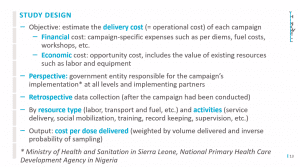 The presentation covered the results from two recent costing studies conducted around integrated campaigns: one in Sierra Leone, which delivered MR, OPV, Vitamin A and deworming tablets, and one in Nigeria, in which a yellow fever campaign was partially integrated with Meningitis A vaccine. ThinkWell conducted the studies in order to inform methodological guidance on immunization costing, and to address the current global evidence gap on what it costs to conduct or integrate a campaign.

The event was moderated by Dr. Deborah McFarland, Associate Professor of Health Policy and Management at the Rollins School of Public Health at Emory University. Dr. McFarland has been involved in health policy and health financing issues for the past 35 years with particular interest in the interface of disease control programs and health systems, and the ethics and economics of resource allocation for public health priorities.

Boonstoppel presented an overview of the study, as well as its surprising result: that co-delivering interventions lowered the cost in one country, but increased it in the other.

She began the session by giving an overview of the current state of the campaign costing evidence base.

“Estimates on campaign costing vary widely, and the extent to which cost variation is driven by differences in costing study methodologies or campaign operations is not clear,” she said. “This makes the evidence hard to compare and to use for budgeting and for the planning of future campaigns.” 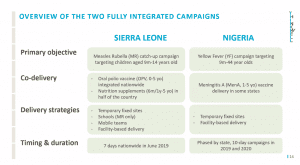 The study found that co-delivery impacted the financial costs, defined as expenses that are shared across the campaign (such as per diems and transportation), in contradictory ways. In Sierra Leone, districts that co-delivered all interventions saw that the cost per dose was lower; however, co-delivery in Nigeria led to a high cost per dose.

One potential cause for this difference is labor cost: areas that delivered multiple interventions may have caused an increased burden on the health care system. Boonstoppel highlighted that existing resources are not infinite, and when the current workforce is already at capacity, adding interventions may mean taking on the cost of hiring and training additional workers.

Boonstoppel also highlighted that cost differences must be evaluated against the quality of the campaign, but warned against drawing conclusions and efficiency trade-offs, stating that integration is not randomized and geographic areas differ in many other ways.

ThinkWell will share formal reports from the study soon.

The Health Campaign Effectiveness Coalition would like to thank the presenter and moderator for their time, and plans to continue the conversation in future events. Watch the recording of the presentation here.

The Test & Learn series highlights different innovative campaign approaches and delivery models in the coming months. While this series has now concluded, other future events will be announced on the Health Campaign Effectiveness Coalition website, in its newsletter, and on its social channels.