View the recording | slides from the presentation. 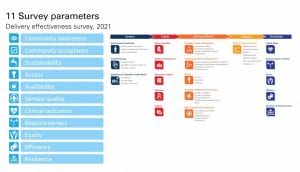 The study focused on vitamin A supplementation (VAS), which is one of the largest preventive public health programs in the world that reaches almost 250 million children every year. Vitamin A supplement was chosen because it is an intervention that is delivered in a large number of countries, using a variety of community-based platforms, and on which significant administrative and survey data are available. However, the study’s conclusions relating to measures of delivery effectiveness will apply to a wide range of health and nutrition interventions.

Dr. Hasman presented an overview of the findings from his team’s research into alternative effectiveness measures that would be beneficial to program managers. The team conducted literature reviews, consultations, and quantitative analysis to identify applicable metrics for diagnostics and tracking of progress toward optimized effectiveness.

“The starting point for this project was a series of simple questions,” said Hasman. “We asked, ‘what constitutes effective delivery of preventative public health services? In order to track performance, is it enough to look at just coverage, or do we need something else?'”

The team identified five parameters for further inquiry: equity, sustainability, access, availability, and community acceptance. Next, they compiled a list of five of the types of deprivations that might affect children’s access to vitamin A, including education level of the mother, household income, and access to an improved water source. Then, using DHS surveys, they divided children in their target group aged 9 months to 35 months into six groups depending on the number of deprivations the children experienced. The data was then used to rank the delivery systems on a four-point scale from equitable to inequitable. 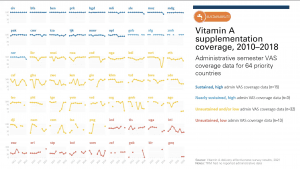 Another of the team’s objectives was to identify sustainability in vitamin A supplementation delivery programs.

Dr. Hasman closed with a number of practical applications and recommendations based on the findings. He called for the evaluation of national-level programs, the comparison of programs across countries, the recommendation of delivery strategies based on specific context, and better planning of national-level programs, while acknowledging the challenge of dependance on population-based surveys.

The Health Campaign Effectiveness Coalition would like to thank the presenters for their time, and plans to continue the conversation in future events. Watch the recording of the presentation, and view the slides from the event.

The Test & Learn series will continue to highlight different innovative campaign approaches and delivery models in the coming months. Future events in the series will be announced on the Health Campaign Effectiveness Coalition website, in its newsletter, and on its social channels.